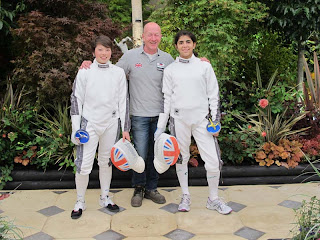 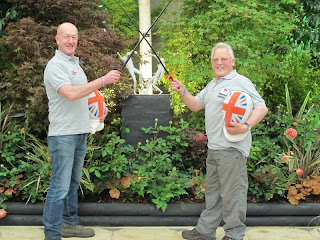 Yesterday was a good day - all went relatively smoothly and we finished in reasonable time. We left with a little planting still to do and plenty of labels still to write.  This has been a relatively sensible Chelsea -no hooligan nights and hungover days. Perhaps the cool temperatures have been something to do with it. 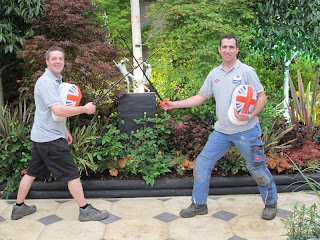 By Sunday late morning the planting is finished. The polythene lifted and its clean up time.  Its always amazing just how much there is to do in those last few hours, stone and gravel to move, deserted pallets, remaining foliage - the poor misfortunate rejected plant specimens that the staging team have left on the sidelines.  The boards that cover the ground around the exhibit have to be lifted and removed, the grass raked, the paths swept, again, and again, and again.  I am always amazed by Neil and Nigel's stamina - they just keep going until he job is finished. We pause to take a few pics - but other than that its all go. 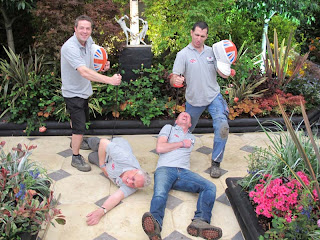 Alex and Josh are our Sunday fencers. They fence with Sabres - rather more violent than the delicate blade work of epee. A rose is beheaded, a piece of acer flies throough the air and I fear for my sculpture.  Our lovely clean paving is soon marked with footprints and looking distinctly lived in.

We are keen to get the minibus off early - most of the guys and girls are back to their day jobs tomorrow. Chelsea won last night and there is to be a Victory parade - not good news on Chelsea Sunday. We get them on the road before 3 - not bad. Team Chelsea 2012 has been fantastic - A group of people from different areas of the company and some friends old and new from the industry. This seems to create a dynamism and determination to create something amazing! I hate it when the team split up at he end of the day; its always an emotional moment.

I always have dreams of leaving early on Sunday afternoon and shopping, having a nap and then heading off for dinner. Needless to say it does not happen - we leave late afternoon. 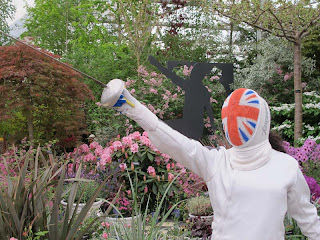