Day 3 on site, Pip and I arrived in style, wet and dishevelled, through Sloane square, envious of the yummy mummies escorting their little darlings to school dry and immaculate. This is “Made in ”! Arriving in the showground we met a very wet Tom Hoblyn bemoaning our dry position in the pavilion. Alex, show manager, gave a clue to the outside temperature as she was elegantly dressed in a bath mat and tea cosy.


I changed my trousers in the secluded gazebo and completely forgot to get re-dressed in my high vis, a beating from tea cosy lady ensued! Pip, having come up specially to take pictures had forgotten just one item – her camera! Women – they just can’t multitask! Armed with my camera she has prowled the exhibit taking candid shots. I must remember to confiscate that memory card. 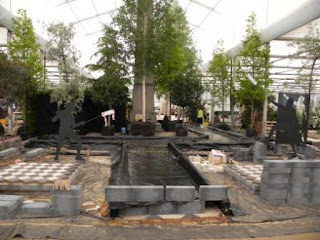 Onto the serious business of the day and the biggest trees have settled in from Saturday and their foliage is adjusting to its new position, and temperature.
The team have installed the fencing silhouettes at the front of the exhibit. Perhaps more importantly they have improvised guards for the fencers’ swords so that we don’t lose any of the staging team at this early stage!

The first lorry of the day has arrived with trees on board. We think of them as the small trees but in reality they are 5 metre high monsters in 80 and 200 litre pots – mostly a four man lift!


Neil has been really busy with the forklift threading his way expertly round the exhibit helping to get these big trees as near as possible to their eventual homes. Once they are in place there is a lot of tweaking to make sure each one is showing its best face to the public on show day.


The danger at this point is that someone unloads a tree and puts it down for a moment on the exhibit and gets distracted and never puts it in its real position. It does sometimes happen and can cause chaos at a later stage. 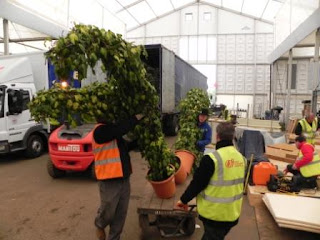 The golden arches also came up today as I want to see how they look in situ and plan the position of the other trees round them. One of the arches may not make it as there is a crisis back at the glasshouse – I may be able to “tweet” good news tomorrow on that score.A bit of time for lights and makeup when we shoot some videos for today’s blog. Although I’m a natural, Pip definitely needs a course in film production. She assures me that this “raw” filming look is really trendy – I think she’s making it up and it is just wobbly filming! 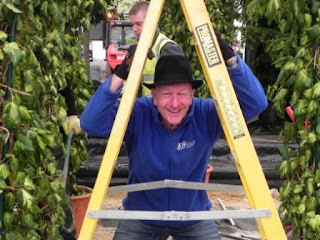 I’m now heading off to the Hurlingham Club talking about guess what? Yes !
Posted by Andrew McIndoe at 21:17