Witch hazels are beautiful, elegant shrubs with fragrant winter flowers. They are usually at their best in January and February regardless of weather, because their delicate flowers are undamaged by frost and snow. However these are not one season wonders; they also have the benefit of superb autumn colour.

The name witch hazel comes from the North American species Hamamelisvirginiana. Branches of this plant were used by early settlers as water divining rods. As they had the same magic properties as branches of  hazel used at home the plant gained the name witch hazel.
Hamamelis virginiana is grown as the rootstock upon which our wonderful garden varieties are budded, so whichever one you choose it has magical roots.

Witch Hazels are easy to grow on well drained fertile soil. They prefer neutral to acid conditions and are not fond of shallow chalk. Some of the smaller growing varieties can be grown successfully in large containers using lime free John Innes compost.
Witch hazels make excellent specimen shrubs and can be grown free-standing in grass. They need space to develop and attain their natural shape and spread; pruning ruins this and should be avoided. Size varies with variety, but on average they reach a height of 2 metres with a spread of 2 metres in 10 years.

The best witch hazels are those grown by Hillier Nurseries. They start life in the field, where they develop a robust root system and branch framework, before they are potted and grown on for sale.  They are also true to type which is more than can be said for many inexpensive hamamelis offered for sale.  This is the ideal time to buy and plant your Hillier witch hazel as plants are full of buds and you have those delicate winter flowers to look forward to. Also the wet summer has resulted in spectacular growth so the plants are even bigger and stronger than usual.
Think about how you position your witch hazel in the garden: Plant yellow flowered varieties against a dark background such as a large evergreen shrub; plant orange and red flowered varieties where the flowers will catch the morning or afternoon sun.

Here are my favourites:

Few gardeners are oblivious to the seductive charm of the Camellia.  When you see those exotic, opulent blooms set against glossy evergreen foliage it’s easy to see why camellias were suffocated in glasshouses when they were first introduced into cultivation.  But despite their appearance camellias are remarkably hardy and are wonderful long-term garden plants that give years of pleasure. 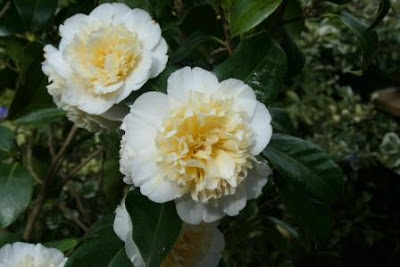 The growth habit of camellias varies: some are broad and lax, some upright and more compact.  For most gardens it is the latter that are more useful, and no camellia has a better growth habit for a pot or for the smaller garden than the delicious Camellia japonica ‘Jury’s Yellow’. I have to admit that this is my favourite variety; one that I have grown and loved for many years, one that never fails to please and perform.  If like me you have a penchant for cream and white flowers this one is a must!

The blooms are the colour of clotted cream with larger outer petals and smaller petals crowding the centre of the flower. Known as anemoniform, I find this type of flower form more weather resistant than classic single and double varieties.  The blooms are upward or outward facing carried on the strong upright stems and presented against glossy dark green leaves. 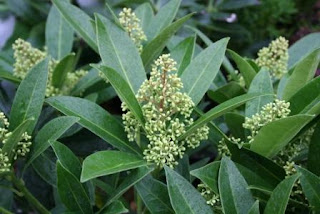 ‘Jury’s Yellow’ is lovely on its own, or you could group it with pots containing other evergreen shrubs.  Another favourite of mine Skimmia x confusa ‘Kew Green’ would work really well in a pot alongside it.  This skimmia has lighter emerald-green leaves and clusters creamy-green buds through winter.  In early spring these open into lilac-like sprays of creamy-yellow flowers with a delicious scent reminiscent of lily-of-the-valley. I really think this is one of the best shrubs to grow for spring fragrance. 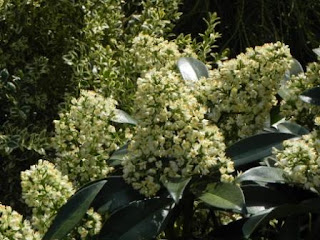 The colour theme of the skimmia and camellia could be accentuated by the addition of a cream-variegated evergreen.  Euonymus fortunei ‘Silver Queen’ is always a winner in a shady spot, however I might be tempted to go for the lovely Pieris ‘Little Heath’. This has small silver and sage variegated leaves that would contrast well with both larger-leaved evergreens.  I have grown this pieris in a pot for a number of years and it stays looking good with minimum attention.  Pot it in the same lime-free compost as the camellia. 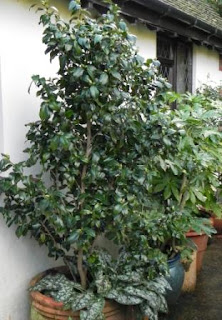 Grow camellias in semi-shade.  They are ideal against the north or west wall of a house away from the morning sun which can cause damage to frozen flowerbuds. Mine grows in a large pot of lime-free John Innes compost against the North wall of the house.  Each year it gets a handful of ericaceous fertiliser and some fresh lime-free John Innes compost or the surface of the existing compost.  During the year it is watered regularly but as the pot is large and shaded it is remarkably undemanding.  These pictures of the plant and buds have just been taken so as you can see we are in for a real treat next spring! 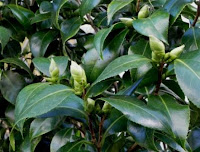 Of course other wonderful varieties are available and if you garden on acid soil you can grow camellias in the open ground.  They are one of the very few flowering shrubs that grow well in shade. Always buy nice big well-budded plants: certain success and not too long to wait for those flowers!
Posted by Andrew McIndoe at 08:23 2 comments: