Almost back to normal - a more serious note. 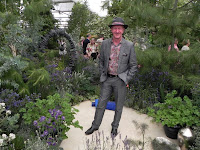 Almost back to normal. Left the show on Tuesday afternoon and headed for home. It is difficult getting away as more visitors arrive, including many familiar faces, for the last few hours of the day. In some ways it seems crazy heading back to Hampshire only to return tomorrow – but the incentive of a night in my own bed and a look at the garden is overwhelming.

It’s great to be home for a few hours and my wife and I take a tour of the garden with a glass of wine in hand. The grass has grown, as it always does, but maybe not as quickly because of the dry weather. A sprinkling of rain has brought the flowers on in the meadow – the orchids are popping up with their pale lilac spikes amongst the clover, buttercups and vetches. I don’t think there are as many this year, certainly not as many early purple orchids – they did not like the dry spring.

The cooler weather has started to even the season out a little. The Cornus kousa and Cornus ‘Porlock’ are loaded in blooms again and will be at their peak in about a week – not far off last year. The perennials are just starting to happen and roses opening. The spring might have been incredibly early but now things are getting back to normal.

Away from the show I think all exhibitors reflect on the activity that has consumed their lives for the past few weeks or days. During staging the Chelsea showpeople establish their village community. Although we are all there for media attention it is easy to resent the invasion of press and cameras when their focus is not upon what you want to talk about.

I have become more resigned to the fact that the outside gardens get far more attention than the Pavilion. However I still resent the fact that the Designers and Sponsors of the outside gardens are considered suitable to speak about their own exhibits on camera at the show, while the inside exhibits are often presented by well-meaning presenters who haven’t a clue what they are looking at. I find this approach insensitive and arrogant. Matters are made worse if you are asked to be on your exhibit at a certain time for filming only to discover that all you are required to do is stand by and watch another agonising and excruciating performance. But as one producer told me –“That’s television” – hmm.. That makes me feel much better!
Because those involved in the show are on such a high there has to be a downside – and if a little media aggravation is it, then it’s a small price to pay for the warm reception we get from the show visitors. I never tire of meeting them and talking plants and gardens. Jim Keeling spent Monday and Tuesday on the exhibit alongside his sculpture and really enjoyed talking plants – I think I’ve got him hooked!

And now it’s on with the show – and more chance to enjoy the company of friends old and new amongst the exhibitors, visitors and the RHS Chelsea Show Team. Haven’t said much about them to date. They really are brilliant and balance everyone’s needs and points of view.
Posted by Andrew McIndoe at 10:57