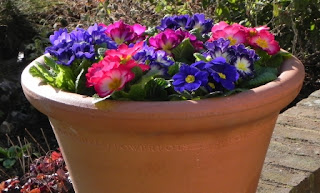 Primroses are at their best now. They will get clobbered by frost but on the kitchen windowsill and a pot on the doorstep they are a real spring fillip - and I feel I need one!
Really struggling to put pencil to paper this week (and last, and the one before etc.)and decide on design and layout of the exhibit. I think I need quiet thinking time - but when I have it I can't do it.  Tweeted earlier in the week: "Should I go for the same route for the path or change it?" Had 2 replies - 1 from Alex, Show Manager saying change it. Great - but how?  If I don't have a path running from Embankment end to Hospital end I will miss out on main flow of visitors through the Pavilion.  If I put in a separate fencing piste, rather than using pathway and temporarily closing off the exhibit, I'm losing more planting space.  Everyone comes up with really helpful advice (he says sarcastically), but no solution.  But then again if I didn't want opinion why did I ask the question!
Anyway, on the positive side there are lots of features underway - my electrician has surfaced - relief.  Fencing sculptures and two fantastic pieces from Tom Stogdon decided on. Building decided on.............
But that poses another problem.  Have gone for open building - no lockup, nowhere to hide. Will that work? what's more M&M Timber have some really nice contemporary containers and panels that would look great with spiky plants - but they do not go with the paving or the look I planned - can I incorporate them?
Need a decision on the positions of the cross bracing in the Pavilion before I can plan - is this an excuse.  I know alex is frantically busy so unlikely to reply - relief - I can still use the excuse!
So that's Chelsea - sort of. Inbetween desperation bouts have been to London - another fun slot on Alan Titchmarsh. Been to Banbury - "Take the Backache out of Gardening" - great fun and a great audience.  Chris Wilde is raffling himself for Garden re-Leaf - will buy a ticket - lots of work to do here and no time. Have a knee injury too - but that's another story.
Been to Scotsdales at Cambridge talking 'Grow Your Own' - so really feel I need to do something with my veg. plot this weekend. 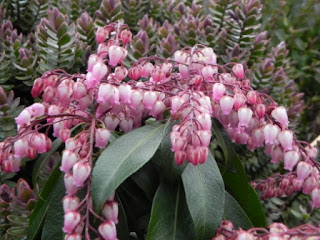 On the positive side I fell in love with Pieris 'Katsura'. Have admired the new growth on this pieris since it first appeared on the scene, but I had not really seen it in flower. The sprays, or should I say recemes of urn-shaped flowers are bruised pink and truly spectacular.  I photographed it against Hebe 'Red Edge' - nice!
The very talented Paul Hervey-Brooks, a Chelsea designer (note I did not say another Chelsea designer) looks like he has a spectacular project at Hampton Court. Thrilled for him - and green with envy.
Tulips starting to push through the compost in pots around the house and on patio. Fortunately winter containers still look great.  Photinia 'Little Red Robin' really is a good plant for a pot. It looks really good next to Cornus 'Midwinter Fire' in a container. I wouldn't use the Cornus as a long-term container plant but its useful to have over winter and then plant into open ground in spring. 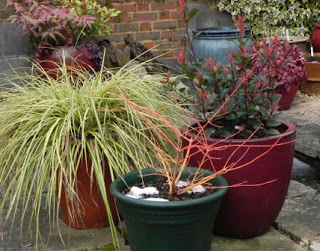 Designing this weekend (practical designing that is) with camouflage netting and rope - don't ask - I might include some pics next time!
Posted by Andrew McIndoe at 01:49