It's not only some of our garden flowers that have enjoyed this year's heavy rainfall.  For the past couple of days I have talked about how those hydrangeas relished the wet weather.

I was in Cornwall last week staying in Mawgan Porth at The Scarlet - the fabulous eco hotel on the cliff tops between Bedruthan Steps and Watergate Bay.  The weather was glorious - our few days of British summer, and we walked for miles along the cliff tops, that is when we were not relexing in the luxury of The Scarlet.  The Cornish cliff flowers were truly spectacular - the best I have ever seen them. 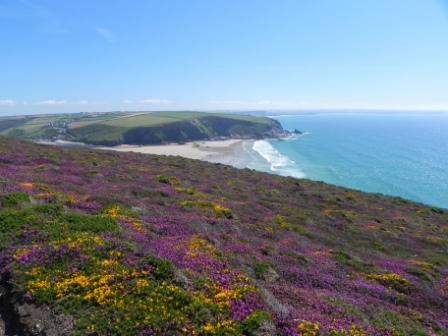 Quilts of ulex, daboecia, potentilla and calluna tumbled over the edge of the cliffs high above the sea.  This is natural ground cover planting at its best.  I would love to be able to replicate this in a garden situation.  What I don't understand is why garden owners, domestic and commercial do not use this planting combination in coastal areas.  Instead they struggle on with santolina, brachyglottis, olearia and much duller shrubs which do not deliver half the display of these natives. 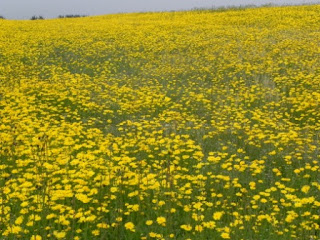 Bright splashes of gold in the cultivated fields proved to be corn marigolds.  I have never seen them in such profusion.  One field which had been ploughed and left fallow was just a carpet of shining golden daisies.  Its interesting how such as brash colour can look so arrestingly wonderful in the natural landscape but be so difficult to live with in the garden. 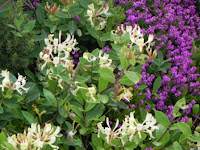 In sheltered hollows and shadier spots along the cliff the honeysuckle was fabulous, its scent carried on the salty air,  I never think of recommending this plant for seaside gardens but it clearly does well in salt laden air which keeps it free from mildew.

The variety of cornish cliff flowers was amazing with more to come.  The cheery little "bacon and Egg" vetches were just opening. Sea squills will follow in a few weeks.  I met a family from Cologne on the cliffs above Bedruthan steps.  They were in awe of the landscape. They declared it to be the finest and most spectacular coastline in Europe. I modestly corrected them: this has to be the most beautiful bit of coastline in the world, not least of all because of those wonderful Cornish cliff flowers. 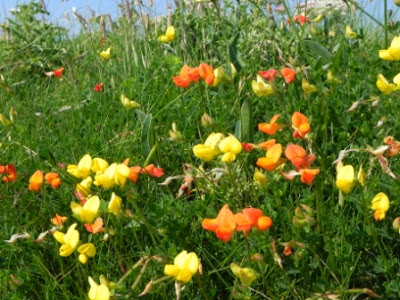