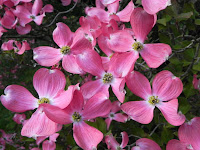 The word at Chelsea, and hopefully throughout the gardening world, is that “shrubs are the new herbaceous”. Wispy grasses and fragile flowering perennials are making way for bony, leafy structure. Interestingly in the past few years as Chelsea Show Garden structures have got heavier, the planting has got lighter and fluffier – a low haze punctuated by alliums, bearded irises and spiky yuccas and dasilyrions.
Flowering dogwoods with their creamy butterfly bracts have spread from the Hillier exhibit through the showgardens that surround the pavilion – a welcome relief from the walls of hornbeam that have provided the main structure in recent years. Maybe they will be followed by a broad palette of woody plants over the next couple of years. I understand why perennials have been at the forefront of the garden catwalk. They grow quickly, and as a designer you have a good idea of available height and spread. Larger shrubs take years to produce so it’s harder to change the trend. If your design depends on large philadelphus in flower – and they fail to perform- what do you do? 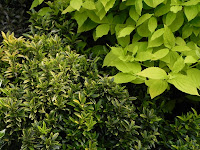 I’ve always been a shrubby myself and its reassuring when Chelsea visitors come onto our exhibit and comment that ‘it’s nice to see some shrubs after all those perennials’. I also think that gardeners are recognising the value of good garden basics which work rather than those new flash-in-the-pan plants which might – or might not. Let’s get away from plant snobbery – plants become “common” because they succeed in a variety of situations. On the other hand some plants are good in a garden, but struggle in pots. You’ll rarely see these at Chelsea or in garden centres so look out for them in real gardens and seek them out.
It seems my shrubs course which is part of the on line www.my-garden-school.com programme is rather timely. See you in class and find out ways of using, cultivating those shrubs which provide us with flowers, foliage and structure throughout the year. I wonder what some of these Chelsea herbaceousy gardens would look like in winter?

For that matter I wonder what they will look like for the last two days of the show. Today, Thursday has been cold and showery. Showery that is until around four o’clock when the heavens opened. Thunder, lightening, gusts of wind. Never seen anything like it. After two hours and several attempts to escape I left the Pavilion with a river flowing through the centre, and water pouring from fallen downpipes. Don’t think my Panama will ever be the same again, and I can feel my suit shrinking as it dries out on the train.
Posted by Andrew McIndoe at 14:21