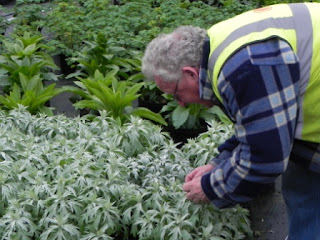 There seems to be rather a long gap between my blog posts this year; perhaps that’s because everything has been moving rather slowly.  There are now only five weeks until the show; that is more than a little worrying.  I know exhibitors always say that, but the cold weather and low light means that plants are generally way behind.  In the gardens the forsythia is just about blooming and here in Hampshire Magnolias are opening their glorious spring flowers. Does that mean more frosts and high winds to come?

Sorry to be pessimistic, but this has been such an appalling season so far it is quite hard to see the light at the end of the tunnel. 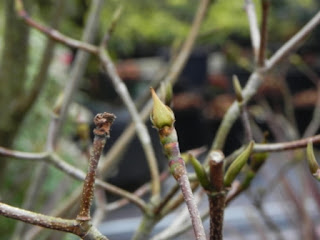 I had a look around the show plants at the end of last week with Ricky. Outside the conditions were Polar, in the glass they were little better.  By now we usually have quite a lot of the plants in cold storage.  This year Ricky has taken the cherries out of the cold store to try and get the buds to move. Cornus, the flowering dogwoods are some of our star plants.  Last year they hardy produced any flowers and were sadly missed.  This year they are loaded with buds but they have a long way to go if we are going to show them. 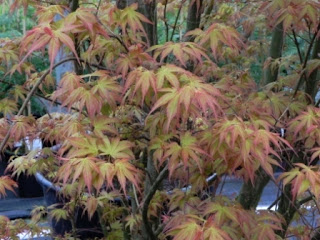 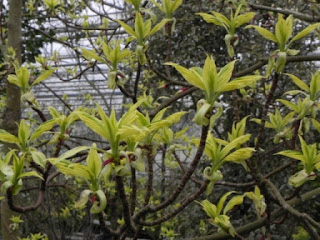 The Japanese maples are unfurling slowly and surely. Now, they could be very good because they are coming into leaf slowly rather than producing masses of soft foliage due to higher temperatures.  The risk is that we will suddenly get those high temperatures and they’ll move apace.  Of course they then demand very regular watering, maybe three times a day.  They will also need shading to avoid scorch under glass.

Likewise the foliage dogwoods, including my favourite Cornus controversa ‘Variegata’ look good, if further behind than usual. Cornus ‘Hedgerows Gold’ is barely shooting and this is normally in full leaf by now.  But then I’m still enjoying the winter stems of Cornus ‘Midwinter Fire’ in my garden, whereas normally they would be employed as pea sticks by this time. 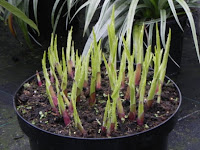 Hostas are shooting promisingly, but the ferns are remaining tightly curled up in brown, scaly mounds on the compost surface.  We do rely on these plants to lighten and soften our shade planting so hopefully they will get a move on soon. 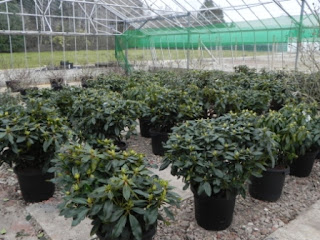 So what about the colour? The rhododendrons and azaleas look great but the buds are showing little sign of colour. That may be a good thing. Although they can be cold stored for several weeks they age quickly when we bring them out from the cold.  If we can take as many as possible from the nursery straight to the show the flowers will last in better condition for the duration. 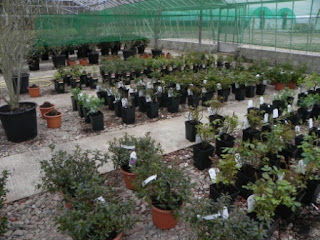 The roses need warmth and some sunshine. We have been in this position before, but we have not always had great roses.  One of our best years was the year we did the canal right up to the monument. We filled the beds on each side of it with roses taken straight from the nursery beds.  It must have been a warm spring.  I remember it very clearly because Margaret Thatcher visited the show on the Monday.  I remember her standing at the head of the canal framed by vintage roses and the trimmed hornbeams.

That was one of our finest exhibits; we won the medal for it. Next year it’s our 150th birthday – I’m tempted to recreate the canal exhibit at to celebrate. Best not to think about that right now – I’ve got Chelsea 2013 to get through first. 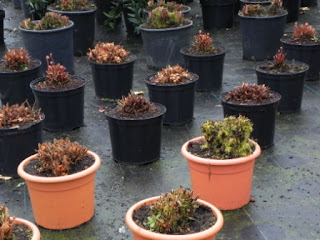 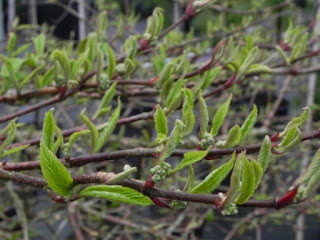