Have taken a blog break since Chelsea - May seems a long time ago.  Chelsea is always followed by a bit of a grey area and this year even the weather has lived up to that expectation: weeks of dull cool, wet dreariness punctuated by the odd couple of days of summer.  However it hasn't been all bad news for gardens: some plants have loved the conditions, among the hydrangeas which are quite magnificent.

I have just returned from a few days in Cornwall, the English home of the hydrangea. Here in the mild South West with its sheltered gardens and maritime climate hydrangeas come through winters unscathed by late frosts. Neutral and acid soils over hard rocks influence the colour of many mophead and lacecap varieties of hydrangea resulting in those gentian blues and rich royal purples we all admire.  Those gardening on chalk soils come away green with envy!

So perhaps its a good opportunity to clear up the mystery of hydrangea colours once and for all. Here I am talking mainly about the varieties of Hydrangea macrophylla which includes the large flowered mophead and lacecap varieties. White hydrangeas such as Hydrangea macrophylla 'Madame Emile Moullierre' stay white on acid or alkaline soils, however the "eyes" of the florets can be blue or pink.  The main floets can blush pink as they age, particularly if the plants are in full sun.  Lacecap hydrangeas consist of large sterile florets around a cluster of small fertile florets - the latter can be blue or pink, influenced by soil type but the sterile outer florets of white varieties such as 'White Wave' stay white on any soil. 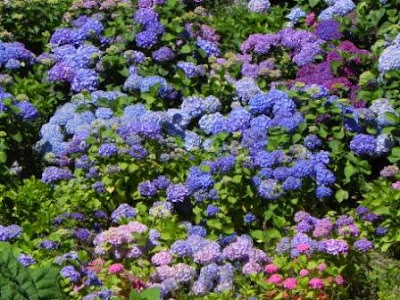 It is the hydrangea colours of pink and red varieties that turn blue on acid soils, and these are the most admired.
While in Cornwall I visited Trebah, one of the valley gardens on the Helford river.  This has a famous mass planting of some four acres of hydrangeas, mostly rich blue.  Here varieties such as 'King George, normally rose pink, and the pink 'Bodensee' change their colour the blue.  Those gardening on chalk will have to put up with hydrangea colours in the pink spectrum, or grow one in a pot of lime free soil and treat it with hydrangea colourant.

Hydrangeas are justifyably enjoying a revival in popularity - Few other shrubs deliver so much over such a long period - even if we can't all have the summertime blues.
Posted by Andrew McIndoe at 02:35