A hectic week - Open days - then The Garden Media day in London at the RHS Hall last Thursday. Sophie and Chrystalle, two lovely lady British fencers came along and gave a demonstration on the stage at The Garden Media Event. They were brilliant, and went down well with the asembled company of writers, photographers and broadcasters.  One or two had a go afterwards - but most made a bee-line for the Beazley foam swords "A present for my children" - of course it is!  The Garden Media Event is an annual gathering at the beginning of the season - well organised, popular and what is more it raises a lot of money for the Greenfingers Charity.
We made The Evening Standard on Thursday evening http://www.thisislondon.co.uk/standard-olympics/article-24033061-team-gb-stars-weve-come-to-garden-centre-for-some-fencing.do- Fencing on the nursery feature with pictures taken at the Open Days - great to see one of our young British Fencers reading The Hillier Gardening Club magazine in print.  Ben Peggs was obviously quite excited about his day in a different world - he had tweeted about it.  Follow him on Twitter to see if he becomes a keen gardener - actually I think he might have other things on his mind at the moment.
A freezing cold weekend has folllowed and I know many have had snow - hope we've sold a few sledges!
Here in Romsey we escaped with little more than a sprinkling that disappeared by morning.  I've spent much of the weekend writing the Summer/Chelsea Magazine - rather therapeutic.  I wonder if the exhibit will bear any resemblance to the way I've described it? 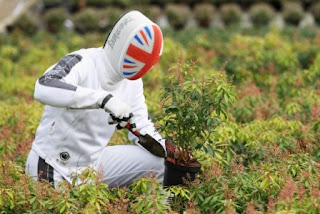